In the Hindu Epic Ramayana, there is a reference to a divine bird called Jatayu. There are different stories and myths related to the birth and life of Jatayu. However, he comes into prominence in the Epic when he tries to save Goddess Sita (wife of Lord Rama) from Ravana, the demon king of Lanka.

The story goes that Ravana had abducted Goddess Sita and took her on his Pushpaka Vimana (Reference to a sort of an aeroplane) to Lanka. Jatayu, who heard the cries of the Goddess confronted Ravana and went on to try and resist his advancement. However, the mighty Ravana used Chandrahasa (his Sword) and chopped off his wings. He fell on the top of a hill, badly injured as a result of the valiant effort.

When Lord Rama came searching for his wife, Jatayu was still alive and gave vital information about the abduction of Sita by Ravana and the direction he had taken her. Lord Rama, who sensed Jatayu’s end blessed the bird and gave him ‘Moksha’. This information provided by the dying Jatayu was crucial in the subsequent turn of events and the Rama-Ravana War that followed.

It is believed that the battered, wingless Jatayu fell on top of a hillock in
Chadayamangalam, a hilly terrain located around 50 km north of the present-day Capital City of Kerala, Thiruvananthapuram. It is right here on this hilltop that Rajiv Anchal and his team have carved out a world-class eco-tourism destination with a 70 ft tall Sculpture of Jatayu to memorialize the sacrifice of the bird hero.

The Sculpture of Jatayu is designed in a way that reflects the pain and agony the bird went through as he laid there, helpless. This astonishing work of art is dedicated to ‘Women’s Safety and Honour’ in commemoration of the effort that Jatayu made to protect the honor of Goddess Sita.

Inside the Sculpture is a 6D Theatre that greets a visitor with the story of Jatayu and the battle he fought with Ravana. One of the best of its kind in Kerala, this 6D Theatre and the video presentation is a visual treat and experience that leaves any viewer in awe.

The Palace of
Janaka

Another fascinating attraction inside the sculpture is a replica of the Palace of King Janaka, the father of Goddess Sita. The Palace is designed after extensive research on how such spaces were organized in the ‘Thretha Yuga ‘, the period of time when the story of Jatayu occurred.

Just aside the grand Jatayu Sculpture, overlooking the greenery around, is a resplendently built Temple dedicated to Lord Rama. Every visitor to the sculpture can also visit the temple and offer their prayers and respect.

The summit of the Jatayu Rock also hosts an Open Air Performance Center with a Stage. Cultural performances and other small events can be organized in this area which the visitors too can be a part of. The area has a splendid watch place as well, from where one could enjoy the sunset in all its grace and grandeur. 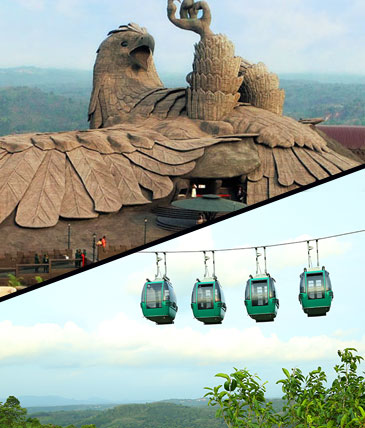 Go up and down in a cable car

Taking you up and down the Sculpture is an array of Swiss-made cable cars, of the standards found nowhere else in Kerala. 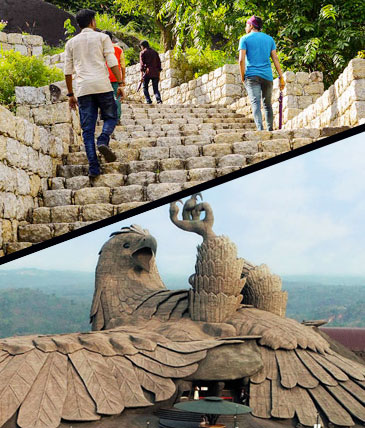